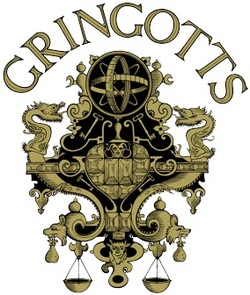 Enter, stranger, but take heed
Of what awaits the sin of greed
For those who take, but do not earn,
Must pay most dearly in their turn.
So if you seek beneath our floors
A treasure that was never yours,
Thief, you have been warned, beware
Of finding more than treasure there.

The only wizarding bank available, with branches throughout the world. It's run by Goblins, and the currency used is metallic coins -- Gold Galleons, Silver Sickles and Copper Knuts.
Muggle-Magical Currency Converter
Jobs offered: 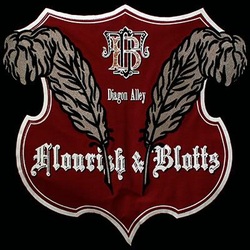 A popular bookshop where most Hogwarts students purchase their schoolbooks. 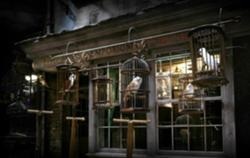 A pet shop located in Diagon Alley that sells owls and various other things needed for the care of owls, like Owl Treats. It sells a variety of breeds, including Screech, Barn, Tawny, Brown, and Snowy. 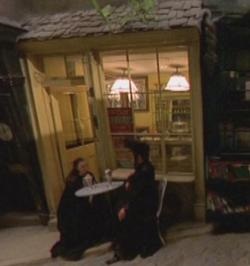 Located at 93 Diagon Alley, it is a joke shop owned by Fred and George Weasley. It sells practical joke objects, such as: 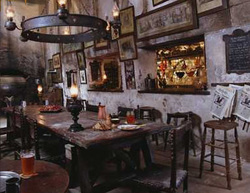 A popular Wizarding pub in London. It is the entrance to Diagon Alley.

Madam Malkin's Robes for All Occasions 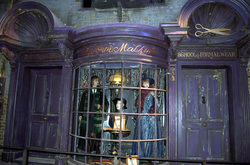 Sometimes simply referred to as Madam Malkin's, it is a shop in Diagon Alley. Students get their Hogwarts school uniforms there, and also dress robes, travelling cloaks, and the like.

One of the shops where students buy their pets and supplies. 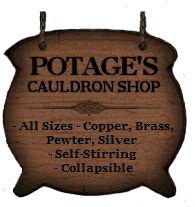 A shop that sells cauldrons.
Materials: 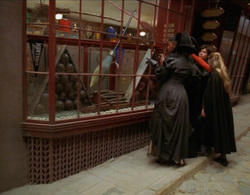 A shop in Diagon Alley. Its main products are things having to do with Quidditch such as Quaffles, Bludgers, and broomsticks. 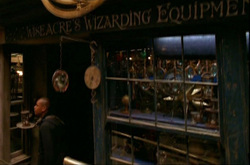 A shop in North Side, Diagon Alley that sells a wide variety of magical instruments. There is also a local branch in Hogsmeade.
There are some more, less important shops in this alley. Only their names will be mentioned below, with a link to Harry Potter Wikia.

Located at 13B, Knockturn alley, this shop sells all kinds of magical items including cursed and dark artifacts.
Some of the items sold here include: 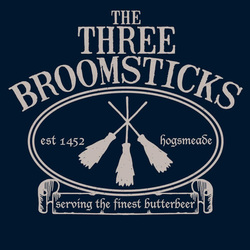 A pub where drinks are sold in glasses and in foaming pewter tankards.
Drinks Sold: 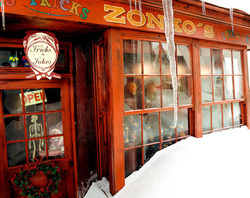 A sweet shop that has the entrance to a secret passageway into Hogwarts in its cellar.

Owners: Ambrosius Flume and his wife.