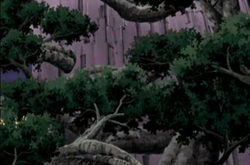 The Wood Release (木遁, Mokuton) techniques combine earth and water-based chakra to create wood. Wood Release techniques can be produced from anywhere, including the user's body, as the user's chakra is literally converted into a source of life. Wood Release is commonly affiliated with the Snake seal. Hashirama Senju was the originator of this ability, evidenced by the fact that none of his relatives have been shown capable of using Wood Release. His ability to use these techniques was one of the reasons for him being given the title of the First Hokage, and with Wood Release Secret Technique: Nativity of a World of Trees he was able to grow the trees that served as the foundation of Konohagakure. This technique allowed him to completely reshape the battlefield to his advantage.

Orochimaru, in his quest to harvest the First Hokage's abilities, injected his DNA into sixty test subjects, and out of the sixty only Yamato survived. This gave Yamato the Wood Release abilities. However, he is not as masterful as the First. Orochimaru also performed a similar procedure on Danzō Shimura by implanting the First's cells in his right arm. While Danzō is capable of using this power at a similar level to Yamato, it appears to drain Danzō more significantly with each usage, causing Danzō to avoid using it whenever possible. As stated by Madara Uchiha, the First's powers are not so easy to control, and that when Danzō was on the verge of death, the cells in his arm went berserk, trying to swallow him whole by converting him into a tree.

A related technique is the Hokage-Style Sixty-Year-Old Technique - Kakuan Entering Society with Bliss-Bringing Hands. This technique produces a seal "sit" (座) on the user's right hand that can suppress a tailed beast's influence over its host. This is done by producing wooden dragons from the ground that attach to the host and force the tailed beast's chakra to recede. Hashirama's necklace aided in this technique's execution, but its exact purpose was unclear. After Naruto destroyed the necklace, Yamato stated that he can no longer suppress the Nine-Tailed Demon Fox's influence.

Note that these combinations are what I think should be expected on combining the given elements. They may differ from the wikia and even canon.
Hits: